The history of the association Acute support for children and adolescents in Lebanon (ASCAL) starts in late summer 2012. During our stay in Lebanon our friend Alaa told us about his two-year old niece Myriam who suffers from a rare form of leukaemia (juvenile myelomonocytic leukaemia).

A couple of weeks later, back in Germany and in Switzerland, we got a phone call from Myriam’s uncle saying: “Without a prompt bone marrow transplant Myriam will succumb to her disease.” It was this moment that we decided to become active. We knew that Malak, four-year old sister of Myriam, was chosen as the donor and that the medical team of the American University of Beirut Medical Center (AUBMC) was ready, but: who was to pay for the costly treatment? At this time, Myriam’s family had no public or private health insurance that would cover the treatment and the financial means of the family were running out. We realized: Myriam is dependent on other people’s support!Myriam’s case motivated us to found an association for those children and adolescents in Lebanon that, due to neediness and disease, need our support. ASCAL was founded on Saturday, October 13th, 2012 in Basel and was registered as a non-profit association at the local court of Freiburg on October 19th, 2012. 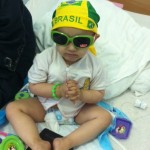